Skip to content
As Facebook invests Rs 43,574 crore in Reliance Jio, Zuckerberg & Ambani explains the ‘why’ of the deal 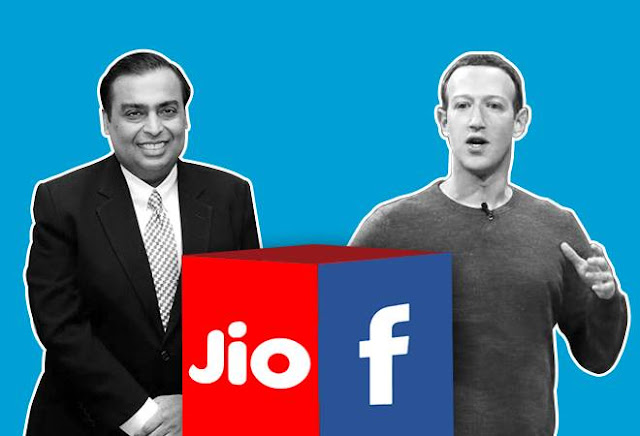 India is in the middle of “major digital transformation” and Facebook is committed to “opening commerce opportunities for people across the country”, founder Mark Zuckerberg said Wednesday, a day after the social media giant invested $5.7 billion (Rs 43,574) in Reliance Industries Ltd-owned mobile telecom company Reliance Jio.
Zuckerberg (valued at $63.3 billion by business publication Forbes), also thanked Reliance Industries Chairman Mukesh Ambani (valued at $47.5 billion) for the partnership and said he was “looking forward to getting started”.
Announcing the investment, Facebook Inc. said it would focus on collaborations between its messaging platform WhatsApp and Reliance Industries Limited’s e-commerce venture JioMart.
“Facebook is teaming up with Jio Platforms—we’re making a financial investment, and more than that, we’re committing to working together on some major projects that will open up commerce opportunities for people across India,” Zuckerberg wrote on his Facebook page.
“India is home to the largest communities on Facebook and WhatsApp and a lot of talented entrepreneurs. The country is in the middle of a major digital transformation and organisations like Jio have played a big part in getting hundreds of millions of Indians, small businesses online,” he added.
“My fellow Indians, I’m here to share some exciting news with you. All of us at Reliance Jio are delighted to welcome Facebook Inc. as our partner. At the core of this partnership is a commitment Mark Zuckerberg and I share for the digital transformation of India,” Mukesh Ambani said in response to Zuckerberg.
In his message Ambani stressed on the benefits of the Facebook-Jio tie-up for the nearly three crore kirana stores around the country that will now be “empowered and can create new employment opportunities with digital technology”.
The deal, which makes Facebook the largest minority shareholder in Jio, comes after the government approved WhatsApp’s digital payment service. The Facebook-owned platform is now set to compete with the likes of Google Pay and Paytm for a market that will be worth $135.2 billion in 2023, according to an Assocham-PWC India study.
WhatsApp has 400 million users in India, its biggest market, reaching nearly 80 per cent of smartphone users in the country.
In his post, Zuckerberg pointed out that small businesses—India has over 60 million of these and a significant majority of these use digital payment services like Paytm and Google Pay—were the core of every economy and millions relied on them for employment.
“With communities around the world in lockdown, many of these entrepreneurs need digital tools they can rely on to find and communicate with customers and grow their businesses. This is something we can help with and that’s why we’re partnering with Jio to help people and businesses in India create new opportunities,” he said.
For Reliance, whose debt pile swelled to more than $40 billion as of September, the partnership will bring in much-needed funds to make good on its promise to cut net debt to zero by March 2021.
Post Views: 40