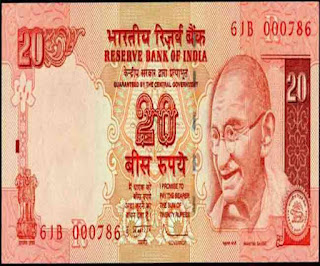 Each of you will have seen a 20 rupee note, but hardly anyone would have tried to think of it, that was why the color pink. Well, every note has a specific color, but the color of the note of 20 rupees is an interesting story attached to the decision. News today is telling its readers why the awakening of Rs 20 for the pink color is selected.

In all countries of the world is moving colorful currency

Not at all the colorful currency in circulation is only in India but also in other countries of the world are colored and through currency notes are easy to identify.

Indira Gandhi had decided the color of Rs 20 notes

Note how the color has been fixed at Rs 20 Interestingly, Mumbai-based Dilip Kanvre tried to tell a story. One day, India’s prime minister Indira Gandhi held a meeting with top officials and the head of mints. The meeting notes of Rs 20 was laid to bring to market. Former Maharashtra chief secretary P. de Kasbekar was witnessed by the decision. The meeting notes of Rs 20 were selected for a mix of pink.

Many large files and take notes at the meeting were the design, color and design of the 20-rupee note that no final decision could be made. In those days the craze of nylon and it was also considered a status symbol. Joint secretary in the banking sector were Kasbekar. The meeting of the shirt he was wearing nylon. Dilip Kanvre whole thing to the audio-visual document of that day in which he was told about it in detail. During the meeting, Prime Minister Indira Gandhi’s pocket consistently Kasbekar colorful envelopes were looking at. Indira Gandhi had asked him the envelope and told him I liked the colors and designs. Indeed, the envelope was a wedding invitation card. Thus ended the meeting and the decision was taken on the color of the 20 notes of Rs. Kasbekar kept in the pocket wedding invitation card was pink and it had to include a mix of ocher and red.