Skip to content
At a time when pan-masala, gutkha and BD-cigarettes are being black-marketed in Jasdan, the provincial official today formed separate teams and sealed a total amount of Rs 10 lakh. Prices are buying these tobacco products and black marketeers are making lucrative money.

A total amount of Rs 10 lakh was recovered from Vinchiya, Rs 10,400 from Amarapur and Rs 200 from Deodhari and a proposal has been made to lodge a police complaint against these persons. Since the implementation of the lockdown, there has been a rampant black market by traders selling pan-bidis. The sudden crackdown on black marketeers by the system has sparked outrage among such people. 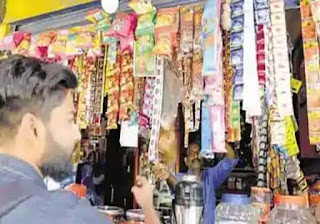 In Jamnagar, 3 persons were caught selling tobacco and arecanuts

Jamnagar: Police have nabbed six persons selling tobacco and arecanuts in Yogeshwar Nagar of Jamnagar city with a quantity of Rs 1.5 lakh and further action has been initiated. Due to the lockdown, the sale of tobacco, gutka and BD has been banned. At that time, the police had received information that some persons were buying and selling tobacco and arecanut rakhi in the beans of a house in Yogeshwar Nagar on the yard road near Gulabnagar in Jamnagar city.

Pan-mawa video behind milk in Bhayavadar: Police registered a crime against the owner

Bhayavadar: In Bhayavadar, a video of the sale of pan-faki under the guise of milk trade in the milk dairy of a former homeguard command went viral and the police conducted an investigation in the dairy. With the closure of pan-mawa shops in the lockdown, complaints have come out that some people are selling pan-mawa-bidi in violation of the law.

Regarding the video that went viral in Bhayavadar, PSI Chavda said that an investigation was carried out in the dairy but no quantity of pan-bd-mawa was found. The dairy has been found to be violating the declaration by sitting there without wearing a mask.